Here's the issue - for the most part, people accept advertising in media because it keeps other costs down.  But the more ads - or at least the more intrusive the advertising - the less valuable the media bundle, and the less people are willing to pay for access.  So push ad loads, and the media bundle becomes less valuable.  Conversely, install a pay wall or increase subscription costs, and you have fewer regular visitors, and your ad space become less valuable to advertisers.
Online newspapers are starting to see real revenues from online advertising.  Still not enough to replace what the print version's lost - but frankly that's not coming back, as advertiser's have found better outlets.  And it's starting to look like paywalls for online newspapers may be viable for some - but at what cost of online advertising?  A recent presentation by Gordon Borrell of Borrell Associates looked at the issue.
More than 450 U.S. online newspapers have adopted paywalls to date, up from 300 in 2012 and 10 in 2010.  On the other hand, 95% of local news websites remain free - TV and radio have largely rejected paywalls, as have local and hyperlocal alternative news sites.  When paywalls first go up, web traffic falls 20-40%, but if there is a free access provision, many users eventually return (if not as frequently). 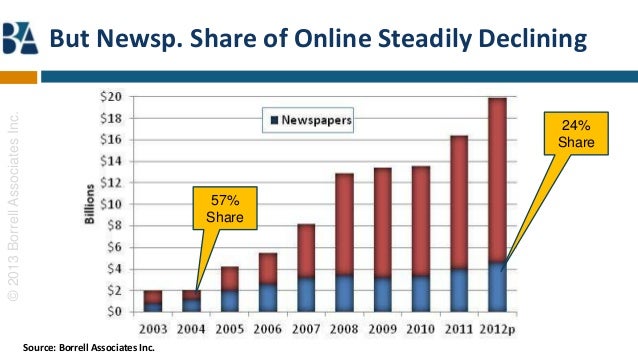 
When it comes to the lean-forward medium of online, the mass-media news model doesn't work very well...
That's because local advertisers seek buyers in the online arena, not readers.

In addition, eye-tracking research is showing that online readers have learned to tune out banner ads. 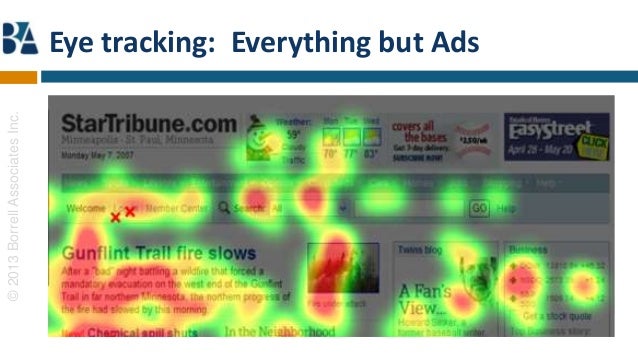 The good news for local news outlets is that people are interested.  Almost three quarters (72%) say they follow local news most of the time.  The bad news is that they've gotten used to getting it for free, so about three quarters of "news enthusiasts" indicate that they're unwilling to pay for local news.  And the number's higher among more casual local news users.  If you follow the numbers, that suggests online newspapers behind paywalls are unlikely to attract more than 15-20% of their market audiences - readership levels below what print editions are still getting.  That's not likely to be a big draw for advertisers. 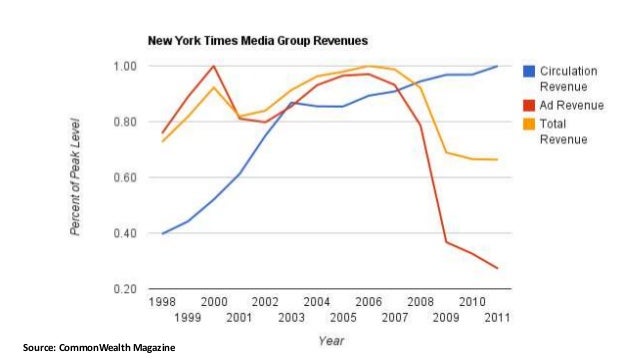 Consider the NY Times Group revenue sources, plotted against their peak values.  Ad revenues peaked in 2000, showed early signs of decline before falling precipitously in 2007.  While the decline's slowed in the last few years, it dropped below 30% of peak levels in 2011.  On the other hand, subscription revenues have been slowly growing since 2005, so essentially it's peak is this now (or at least until it starts falling).  But the gain in subscription revenues hasn't kept pace with advertising loses, so total revenues have fallen. since 2007.

Thus, erecting paywalls is likely to further damage the ability of online newspaper sites to generate local online advertising revenues. So you might think that erecting paywalls is a bad idea.  But Gene Borrell argues that it isn't:
So put up a paywall and charge, but don't expect it to solve all of the newspaper industry's revenue problems.   The Internet's been a disruptive technology, but it's also an opportunity.  And just because it's disruptive doesn't necessarily mean that it's going to kill off the newspaper industry.  Borrell's good advice is to remember your core business and focus on it, and treat online as an opportunity to develop new products and revenue streams to supplement and complement it - rather than seeing it as a replacement. 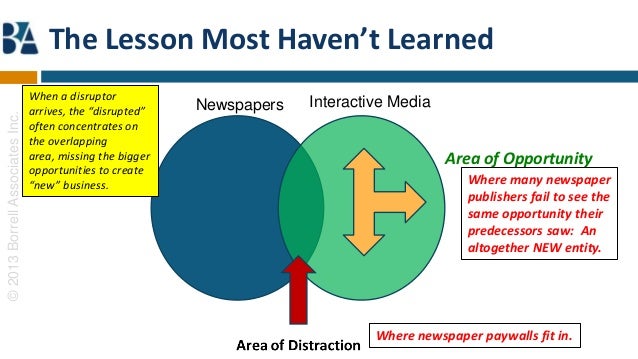