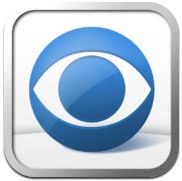 CBS has released an app for Apple mobile devices (using iOS) that will provide direct access to current network programming.  (The network indicates that Android and Windows 8 versions are in the works).
The free (but ad-supported) app allows users to watch full shows streamed in HD, and includes live social feeds for fans to chat with one another.  The network indicated that most daytime and late-night programming will be available within 24 hours of initial broadcast, but prime-time programs will normally be available only after 8 days.  It also seems that for now, at least, not all programs will be available through the app.