Graphic of the Week - What's Essential?

Email ThisBlogThis!Share to TwitterShare to FacebookShare to Pinterest
Labels: Internet, media use, mobile 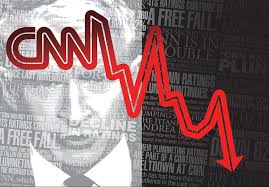 One sign of CNN's continued ratings fall was last weekend's cancelling of their premiere prime time show, Piers Morgan Live.  The newly reported Feb 2014 viewing numbers provide ample support. CNN's prime time viewership last month was down 47% (from Feb 2013) at the 8 pm slot, and down 46% at 9 pm.  The 7pm lead-in was down 39%.  The situation with the desired news demographic of adults 25-54 was not quite as dismal - down 32% at 7pm, down 46% at 8pm, and down 38% at 9pm.  The full-day numbers are also down significantly, with CNN losing more than a quarter of its viewers from Feb 2013, averaging just 307,000 total viewers, and just 96,000 in the 25-54 demo.  The monthly numbers were the lowest ever for Piers Morgan Live, Crossfire saw its lowest ratings ever for total audience, and CNN hit a 22-year low in total viewing for the 7pm time slot.

As for its competition, Fox News continued its dominance in total viewing (146 consecutive months as the top-rated cable news network).  Total day viewers averaged more than a million viewers, and almost 1.9 million total viewers in prime time.  FNC saw modest gains of 2% in total average viewers from Feb 2013, and primetime viewing saw a 6% gain in overall viewing, and 3% in the 25-54 demo.  Total day viewing in the desirable 25-54 demo was down 2%.  O'Rielly and Hannity saw slight gains, while the The Kelly File at 9pm saw viewership gains of 23% overall, and 11% in the key demo.

The numbers were enough to put Fox News as the third highest prime time viewership among all cable networks (fifth in total day); in comparison MSNBC ranked 26th in prime time and 27th in total day, while CNN came in 39th (prime time) and 34th (total day).  CNN was able, however, to return to beating Headline News.
Fox dominated the top-ranked programs list, with the top 13 shows in total day, and 8 of the top 10 in prime time. Four Fox programs registered more than 2 million average monthly viewers, with several others just under than threshold.  MSNBC's top show was The Rachel Maddow Show, with just under a million viewers on average (14th overall).  CNN's top show was Anderson Cooper 360, whose average total audience of 421,000 made it the 23rd most-watched cable news network program (behind CNBC's Shark Tank).

Several suitors have been pursuing Time Warner over the last few months.  It looks like Comcast is the likely winner, offering to purchase the second-largest cable operator for $45 billion.

But the deal is more about broadband than cable.  The addition of Time Warner broadband customers would give Comcast more than 33 million broadband subscribers and what amounted to $18 billion in subscription revenues in 2013.  That's about half of current broadband subscribers.  And broadband revenues are growing faster than cable video, with higher profit margins (around 90 percent).  The cable side, in fact is in trouble, losing customers and facing and increasing profit squeeze.

The deal is also about positioning Comcast for the future and the likely radical transformation of the video signal delivery business.  Local stations and cable networks keep pushing licensing fees higher and higher in search of revenues to replace stagnant (although still quite large) TV advertising dollars.  And then there's the continuing advances in IP video streaming, and changing audience habits.   Comcast is one of the few TV companies doing R&D - in fact, they have the largest R&D presence in the industry - and much of that effort is geared towards positioning the firm for the developing IP streaming, digital broadcast innovations (such as Aereo and multicasting), and mobile video explosions.

Those under 25 are spending less time watching traditional live TV - considerably less.  Delayed viewing and consumption of IP-video streams from an increasing variety of high-quality online video services (i.e. Netflix), as well as gaming, are eating up an increasing share of viewer's attention.  Advances in mobile, in the meantime, are creating new opportunities for TV viewing - although delays in implementing "TV Everywhere" has slowed cable's ability to tap into that new market.  Experts are now expecting a major transformation in TV viewing, even while unsure just what kind of TV market will eventually emerge from the growing chaos.

I'd be remiss, though, if I didn't point out the regulatory roadblocks in the way of the merger.  After all, the deal would combine the two largest cable system operators in the U.S., each of whom also owns a wide range of other media outlets, including broadcast networks, cable networks, film & video production and distribution outlets, publishing, etc.  Both are often listed among the world's 10 largest media conglomerates.  While there's not a lot of direct competition between the two cable and broadband operations (they're more local monopolies, increasingly challenged by telco and broadband operators like AT&T, Verizon, and Google), media is an area where just being large is considered problematic.  More problematic on an anti-competitive basis would be many of the other media components, which are arguably more directly competitive with one another.  And then there's the issue of Comcast's data caps and their interference with (slowing down) of unaffiliated video streaming services - the one glaring anti-competitive behavior fueling Network Neutrality debates. There's lots of reasons the deal might not be approved and consummated.

Even if the FTC doesn't knock the deal down in terms of sheer size and concentration, there will need to be a lot of negotiations and deals to meet the antitrust concerns of all the various markets and media elements in play.

(Let me also point interested readers to Ken Doctor's analysis of the deal and the fundamental issues confronting cable systems like Comcast and Time Warner Cable.  The Newsonomics of Comcast's deal and our digital wallets)

Sources -  If Comcast buys Time Warner, TV could change forever,  GigaOm
The Comcast-Time Warner Cable merger is not a marriage made to last, The Guardian

History of US Cable Concentration: Chart Source:  Chart: Two Decades of Cable-TV Consolidation
Posted by Benjamin J. Bates at 10:30 AM No comments:

Measuring passive audiences for one media platform is difficult enough - what about developing a metric that tries to measure interactive engagement and involvement across multiple platforms.  A number of major research firms are working on the problem, lead by Nielsen (looking to expand broadcast ratings to online) and comScore (looking to extend online metrics to broadcast and print).

Overseeing these efforts is the Interactive Advertising Bureau (IAB), an advertising and marketing industry group, which is setting guidelines and standards that the industry wants any cross-platform and interactive audience metrics to incorporate before they will be adopted by the industry.  The IAB has recently released a report setting out some basic definitions and outlining six broad goals and 30 core metrics that should be incorporated into proposals for industry-acceptable interactive advertising measures.

The goals recognize that it may be difficult, if not impossible, to build one single effective measure - still, core metrics need to be comparable to those used for other media, and have achievable benchmarks of objective performance.  The report also stresses that social media encompasses more than a single form of engagement.

Determining what you want to know is (or at least should be) one of the first steps in research, and particularly in the development of reasonable and valid quantitative measures.  Too many of the traditional metrics for traditional media were based on what could be easily measured rather than trying to measure the things that those using the metrics really wanted to know.  It's good that the industry is thinking about what it really wants to know about interactive advertising exposure and effectiveness, and isn't rushing to adopt something this time (despite Nielsen's several attempts to jump the gun and get the industry to support it's product).

If the financial news wasn't bad enough, a story in the New York Observer suggests a growing split between mainline editorial staff and the paper's leadership, particularly the editorial page editor, Andrew Rosenthal.  The piece also suggests that the Times' editorials have lost their ability to influence local and national politics.  Some selected (anonymous) quotes from the piece:

"What strikes me about the editorial and op-ed pages is that they have become relentlessly grim... They’re horribly doctrinaire, down the line, and that goes for the couple of conservatives in the bunch."

"The fact of the matter is the Wall Street Journal editorial page just kicks our editorial page’s ass. I mean there’s just no contest, from top to bottom, and it’s disappointing. You know, we hold ourselves to incredibly high standards on the news side... to see (mediocrity) persist and persist and persist on the editorial page with nobody having the guts to retire some of the people or things that are not only not working but have become caricatures of themselves is just a huge bummer.”

The State of Video Streaming: Sports

NBC and the BBC hit it big by streaming every moment of every event at the 2012 London Olympics, and currently plan on doing the same this year for the Sochi Winter Olympics (as long as the Russian government doesn't block things).  The breadth and success of those 2013 Olympic efforts prompted a lot of audience trying and sampling.
And then there's the runaway success of Netflix and its brethren.

All of this showed promise of a spurt in the use of video streaming for watching sports - which is being confirmed by the latest Adobe Digital Video Benchmark report. The 2013 4th quarter report shows that sports video streaming has gone up 640% increase over the previous year.

In addition:
One reporter contacted Adobe, to get their take on the fact that sports is outperforming other video content in generating video streams.


Campbell Foster, director of product marketing for Adobe Primetime, the company’s TV publishing infrastructure platform for service providers, said the data back up what many other industry observers have noted about sports: It is engagement viewing that fans don’t want to miss, so they use whatever device they can to watch.

Source:  Are You Safe in Sochi?,   Sportsmanagementdegreehub.com
Posted by Benjamin J. Bates at 9:43 AM 1 comment: