The Distant Past of Video Journalism

From Poynter's This Day in History, some early Edison movies on journalism.
First, war correspondents rushing to file stories at the telegraph office.  Reminds me of early slapstick. (1889)

Third, a Cuban ambush of a Spanish patrol (looks kind of staged- actually most of the battles filmed look like they were staged re-enactments). (1898)
Posted by Benjamin J. Bates at 2:28 PM 1 comment:

From Pew Internet: In January, 89% of young adults (18-29) use social networking sites.  By now, that's likely over 90%.  And penetration likely over 50% even for those least likely to use. 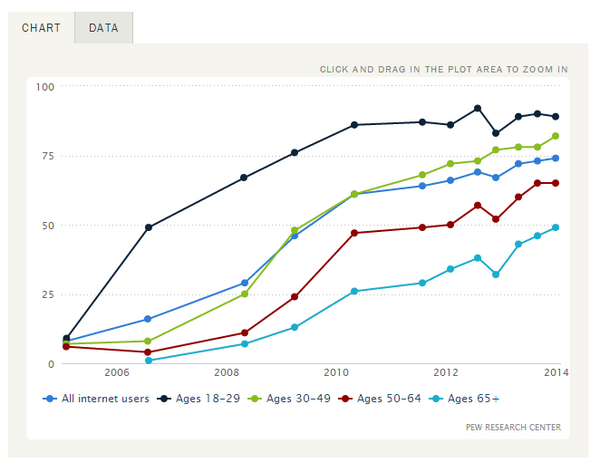 Posted by Benjamin J. Bates at 1:51 PM No comments:

Email ThisBlogThis!Share to TwitterShare to FacebookShare to Pinterest
Labels: media use, social media

Signs of the Print Holocaust Over the last year, the newspaper industry has seen a lot of departures - with major newspaper companies getting rid of a lot of their major properties.  The Washington Post Company sold the Washington Post to media newcomer Jeff Bezos, founder of Amazon.com.  The New York Times Company sold the Boston Globe to John W. Henry, owner of the Boston Red Sox.  And Time Warner basically gave away what had been its' premier product, Time magazine (whose new owner also found itself burdened by an additional $1.3 billion in debt).  The Tribune Company has been trying to sell major papers, like the Los Angeles Times and Chicago Tribune for years (and finding limited interest).  Even Murdoch's News Corp took action last year, splitting its print operations from its broadcast, digital, and entertainment operations.

The notion of spinning off print newspapers from broadcast and digital seems to have caught the interest of other media conglomerates -, particularly those with poorly performing print operations.  Over the last few weeks more splits were announced.  The Tribune Company split off most of its newspapers into a separate company (along with $350 million in debt).  E.W. Scripps Co. announced a merger with Journal Communications, and then quickly followed that by spinning off the combined print newspaper assets into a separate company.  And most recently, Gannett announced it would spin off its broadcast and digital operations from its struggling print newspapers next year.

While these announcements tout the prospects for the new print companies, most analysts see the moves as cynical efforts to dump assets with declining value and limited futures.  The lack of serious potential purchasers for major urban dailies in recent years hasn't helped - leaving conglomerates with few alternatives for dealing with newspaper properties in decline.  Spinning print off may be their best financial option at this point - particularly if they see no profitable future for their print dailies.

And if companies whose beginnings were in urban print dailies, whose traditional self-image was as newspaper moguls, are at the point where they see no future in that segment anymore, it's hard to be optimistic about the industry.


“I’m very skeptical that in the long term you are going to have a hard copy daily newspaper in each market,” Mr. Huber, an analyst with Huber Research Partners, said.

Sources -   Print is Down, and Now Out,  New York Times
Gannett, Owner of USA Today, to Split Its Print and Broadcast Businesses, New York Times
Now Scripps Is Splitting, Too,  The Wall Street Journal

Posted by Benjamin J. Bates at 1:32 PM No comments: A good piece by Joel Mathis on the decline and fall of the Philadelphia Inquirer and Daily News.  Working from a financial report, he tracks the progress from being a reliable cash cow to bankruptcy in a little over a decade.

A large chunk of the problem was the same faced by most large urban dailies in the U.S. - a big drop-off in advertising revenues as one industry after another found better alternatives online.  It didn't help that this was followed by the recession - which hit all advertising revenues hard.

But when the industry started to recover after 2010, the loss of advertising continued to fall by double digits for the two Philly papers.  The fact that the papers changed ownership 4 times in 12, and the lack of consistent business strategies, didn't help either. A look at the numbers suggests some other factors at work.
Thus the various manager's plans created a near "perfect storm" of negative feedback.  Initial shifts in advertising categories prompted cost-cutting,  That led to a focus on cutting staffing, which impacted the value of the news product.  Declines in product value led to circulation losses, which were exacerbated by cost increases.  Massive circulation losses reduced the value of advertising, which gave advertisers even less of a reason to return to the papers as the recession ended.

There's one other interesting aspect to tease out.  Note that there's a large, but shrinking, difference between print ad revenues and total ad revenues.  That would include digital advertising, which hasn't grown much.  It also includes preprint advertising (i.e. inserts) - and for a while it seemed that the papers were doing well with that revenue category.  However, large circulation losses make inserts less valuable, and by 2012 it seems that the Philly papers had lost that advertising sector to competitors as well.

Sources -  "The Long Fall of the Philly Newspapers,"  PhillyMag.com
It turns out the 2000s were not a good decade for The Philadelphia Inquirer and Daily News,  Nieman Journalism Lab

Visual history of US Mobile M&A

Now that the Sprint/T-Mobile deal seems to be definitively off, GigaOm took a look back at how the top 4 U.S. mobile operators got to this point.

Source -  How we got here: a visual history of US mobile companies,  GigaOm
Posted by Benjamin J. Bates at 10:02 AM No comments:

The July 2014 cable network news ratings are out, and the big news is MSNBC's tumble.  MSNBC had a firm hold on the number two slot for months, over a faltering CNN.  Last month, however, their mumbers slipped to #4 in terms of Total Day Viewing in the key 25-54 demo, and to third place in prime time viewers. On the morning front, MSNBC's Morning Show fell behind CNN's New Day, and Rachel Maddow had her second worst ratings ever.

While this was going on, Fox quietly extended its streak of being the most watched cable news network in America. And Fox's The Five was not only the top news program during its time slot, it grabbed the most viewers of any cable program at that time slot for the third time (beating the pants off of Spongebob).

There was more bad news from the July numbers.  Even with all of the big breaking news during the month, CNN, HLN, and MSNBC experienced significant declines in viewing from July 2013.  MSNBC lost a full third of its total day audience from where it had been a year ago. Fox managed a slight increase (2%) in the prime time audience from its July 2013 numbers.   And Fox's The Five was not only the top news program during its slot, it grabbed the most viewers of any cable program at that time slot for the third time (and beating the pants off of Spongebob).

Source:  CNN Overtakes MSNBC in July as Ratings Take a Hit, The Hollywood Reporter
Posted by Benjamin J. Bates at 10:22 AM No comments:

Summer has traditionally been a slow time for the major broadcast networks in the U.S., as well as for TV audiences.  With viewing numbers down, and the key Fall sweeps coming up, summer has traditionally been a dumping ground for program repeats, a place to test new programs, and a last chance to air contracted (but unaired) episodes of canceled series.  Outside of the occasional big sporting event, there's not much to look forward to on broadcast television.

On the other hand, the lack of quality competition from the big networks gives newcomers an opportunity to counter-program with the best of new programs and episodes. When Fox started, it moved up the starts of some of its better series to the summer.  Putting original episodes of quality programs up against the dregs of big network offerings, gave viewers an incentive to sample and evaluate Fox series and build audiences. Spanish-language network Univision has been trying to move from a niche network to a challenger to the Big 4.  It's expanded its reach beyond urban areas with high numbers of Hispanics, adding its own stations in larger markets, picking up affiliates, and making a push to get on multichannel basic service tiers.  It's worked to shift its programming focus from airing licensed series from other Latin American networks and channels, to a mix reflecting its goal of being a general-interest broadcaster.

Among those moves has been developing a strong news presence, expanding and improving its sports coverage (including live game coverage of Latin American soccer and baseball leagues), and putting a major focus on creating original entertainment programming.  And it's starting to be successful.  In the key market demographics for broadcasting (19-34 and 18-49) it's beating monthly ratings for one or more of the Big 4 networks with increasing frequency.  And for the second straight year, its July primetime ratings have come out on top - beating the audience numbers for all of the other US broadcast networks.  It also had the youngest audience (median age 39, vs median age for the Big 4 of 56).

Of course, Univision's ability to outdraw the Big 4 is not only a result of programming acumen.  It's been helped by two long-term trends: declining ratings and shares for the broadcast network as viewers have shifted to and expanding number of viewing alternative; and the fact that Hispanics are the fastest growing demographic group in the U.S.  Still, their successes over time suggest that they've made the move from being a niche service to becoming a fully competitive general-interest network.

Source:  Univision is the #1 Network for the Second Consecutive July Sweep Among Both Adults 18-49 And Adults 18-34, TV by the Numbers.

Posted by Benjamin J. Bates at 9:45 AM No comments: