Yesterday the FCC formally approved a long-awaited increase in its definition of what counts as "Broadband" Internet connectivity.  The Commission, in giving formal approval to release its annual report on the status of broadband, gave implicit approval to that reports change in what it considers to be broadband service.  The old standard was 4 Mbps downstream and 1 Mbps upstream - while the new standard is 25 Mbs downstream and 3 Mbps upstream.
Critics have long argued that the FCC's 4 Mbps standard was outdated - it was established well before video streaming usage exploded, and 4 Mbps isn't sufficient bandwidth to stream a TV signal uninterrupted by delays.  The industry itself established an informal standard of 20 Mbps as needed for broadband connectivity to homes years ago.  That level of bandwidth was based on the ability to live stream 2-3 separate video streams to multiple devices, while leaving enough capacity for second screen data and other Internet usage.  The EU is using the 20 Mbps standard for its policy goal of achieving universal broadband access.
The definition of minimum broadband standards is critical to determination of access and availability of broadband to consumers, as well as determining whether there is effective competition in broadband markets.  Its been thought that the FCC continued to use its 4 Mbps standard to inflate national availability numbers to seem more on a par with availability numbers in other countries.  While that may have been a minor concern, its more likely that they stuck with 4 Mbps because that was the data capabilities of 3G cellular services and the small satellite-based data services.  Inclusion of 3G cellular and satellite data coverage provided both near-universal accessibility, and competition to wired (land-based) cable and telecomm providers for about 90% of Americans.
The new 25 Mbps standard basically excludes those (but is within 4G cellular standards), and reflects the reality that 17% of the U.S. population doesn't have access to data services meeting the new standard.  More critically, from a policy perspective, is that exclusion of satellite data services (which currently don't provide services at that speed yet) leaves large swaths of rural America without "broadband" access.  The new report determines that 53% of rural population (63% of those living on tribal lands) won't have access to data services meeting the new standard for broadband.  Similarly, applying the new standard in considering whether there is effective competition for broadband service providers means that only 37% of Americans have access to two or more broadband services.  Excluding 3G service providers is the primary cause for the drop in "competition." Also, not all of the "4G" services being offered in the U.S. meet the formal international standards - some peak out at 21 Mbps downstream, which qualifies as broadband under EU standards (20 Mbps) but not the new US standard (25 Mbps).
While the standard for "broadband" in the U.S. certainly needed changing, whether it should be at 20 or 25 Mbps is somewhat debatable in the short term.  In the long term, there's already discussion of what the next standard should be (mostly centered for now at 50-100 Mbps).  Give it a few years, and we'll need to redefine "broadband" again anyway.

Posted by Benjamin J. Bates at 9:46 AM No comments:

I'll have more to add from the report later.
Posted by Benjamin J. Bates at 7:43 AM No comments:

Infographic: Storytelling in the Age of Social News Consumption (Edelman)

From the Edelman Media Network: 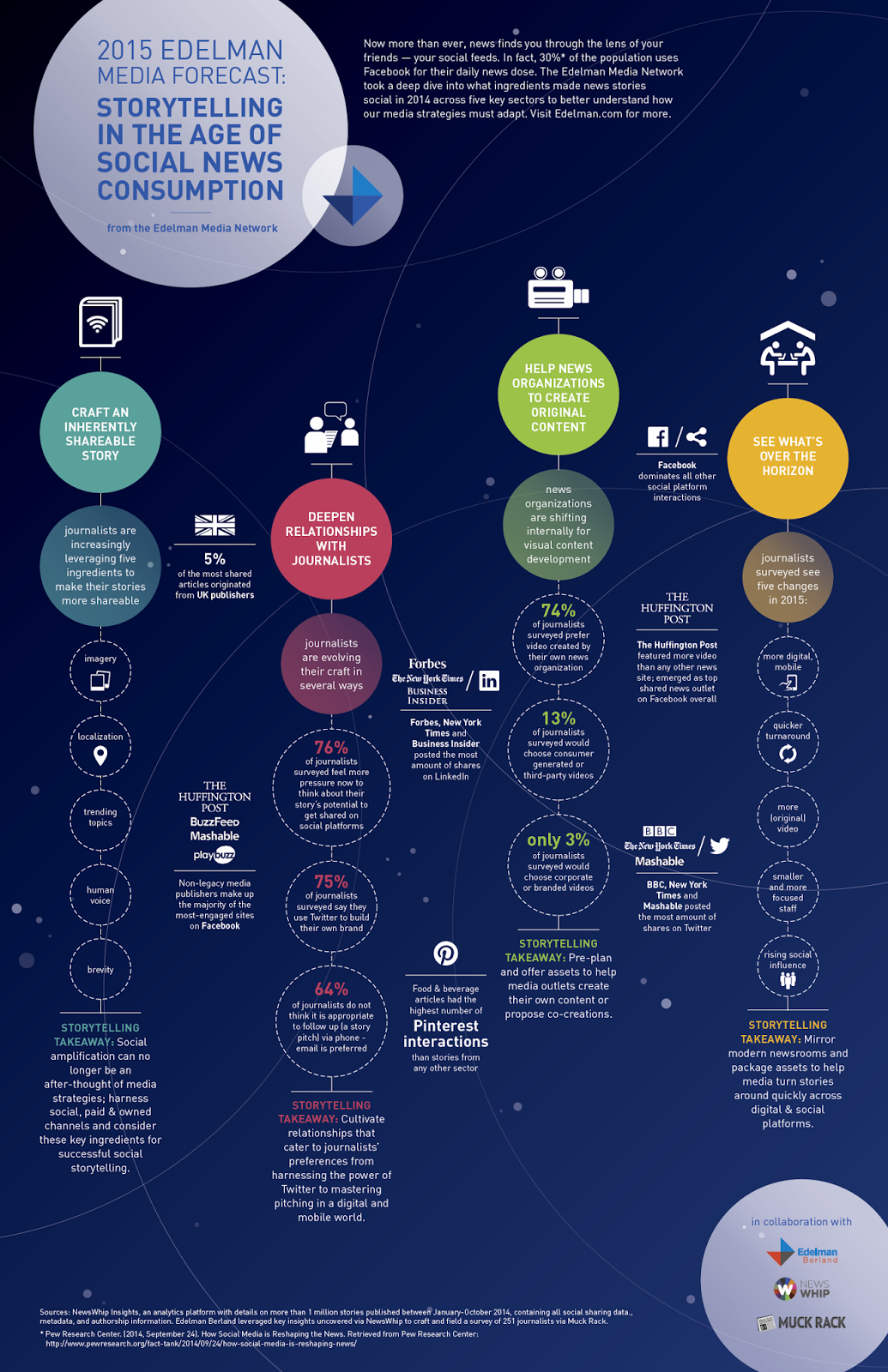 Posted by Benjamin J. Bates at 7:33 AM No comments:

I've been on a bit of a hiatus (last post was a few months ago, as my classes last fall were all research methods and statistics, and other things kept popping up.  But this term I'm back to the present - my classes are on cable, internet, and other content delivery systems, and on programming strategies for those systems (as well as more legacy broadcast and print media).
There's also been a bit of an issue as the University signed up with Google as an organization, which means I may have to shift ownership of the blog.  So bear with me, please.
Posted by Benjamin J. Bates at 7:24 AM No comments: