Globally, Press Freedom down in 2014 reports 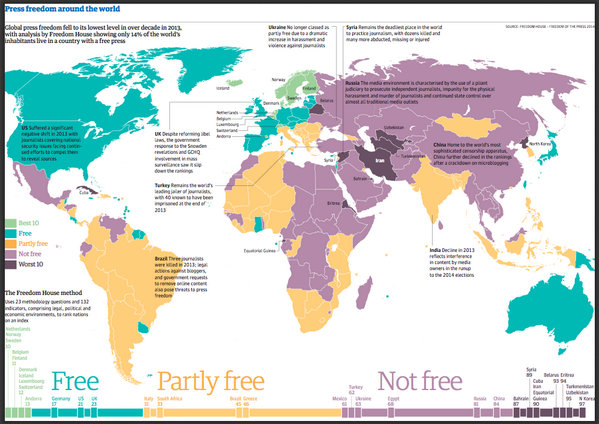 The latest Freedom of the Press report was released this morning by Freedom House. The report suggests several factors contributing to the lowest overall level of press freedom in a decade.


“We see declines in media freedom on a global level, driven by governments’ efforts to control the message and punish the messenger,” said Karin Karlekar, project director of the report. “In every region of the world last year, we found both governments and private actors attacking reporters, blocking their physical access to newsworthy events, censoring content, and ordering politically motivated firings of journalists.”

Overall, the report concurs with the Reporters Without Borders recently released World Press Freedom Index 2014 report.  Levels of press freedom are declining in many cases, due to spreading conflict and "a tendency to interpret national security needs in an overly broad and abusive manner to the detriment of the right to inform and be informed." The U.S. comes in tied for 30th in the Freedom of the Press report, a significant drop from the 17-18 positions in previous reports, and a similar drop of 13 positions in the World Press Index 2014 report to 46th place.  Recent revelations of spying on reporters and attempts to criminalize those reporting leaked information were a major contribution of the decline for the U.S., which President Obama continues to assert is "the most transparent, ever."

It's been a tough few years for the press.