If recent news stories are any indication, it's time for The Cable Fee Blame Games to begin. 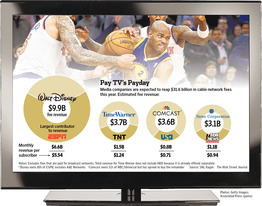 It's no surprise that cable (and other multichannel provider) subscription rates are going up.  Programming license fees keep rising, the number of channels increase, and the last round of retransmission consent negotiations didn't go well for the multichannel industry.  And the increases look to be even higher this year - perhaps enough that the industry is looking for others to blame.  Many licensing deals require system-wide carriage of top channels, and are often sold in conjunction with new or less-valuable channels. So now some cable execs are talking about possibly breaking the basic tier into mini-bundles, even as public interest groups raise the prospect of a la carte pricing.
It's come to the point where Cablevision launched an anti-trust suit against Viacom, accusing it of forcing the cable MSO to carry (and pay for) less popular Viacom cable networks in order to get MTV and Nickelodeon.


"Without the 'take it or leave it' requirements of bundled programming packages at a wholesale level, cable companies could tailor smaller and lower-priced packages that could offer flexibility and have great appeal to specific interests and audiences," said Charlie Schueler, spokesman for Cablevision.

Other multichannel providers are experimenting with partial unbundling.  Verizon's offering a basic mini-bundle that drops expensive sports channels and knocks $15 off monthly fees.  Mediacomm has been advocating a hybrid model with the most expensive channels offered a la carte on top of a basic bundle.
And now the broadcast networks are talking about wanting to get big license fees from multichannel distributors, either directly or indirectly, by grabbing a big share of increased retransmission consent fees for affiliates.  Some of the amounts I've been hearing are unreasonably and exorbitantly high - but between what the broadcast nets are talking, and sports channels passing through sky-rocketing coverage rights fees, coming jumps could be as high as $25-$50 a month, as they can't afford not to have high-demand content in an increasingly competitive environment.  Thus, cable needs to try to put the blame for big rates increases elsewhere.