Mobile is booming.  Half of U.S. adults have smartphones, and 1 in 4 have installed an app from a local media source.  Overall, that's not an overwhelming number (yet), but its enough to get a look at how these early adopters and utilizing those apps.
StepLeader conducted a large scale survey of mobile users, and for this report looked at the roughly quarter of them that indicated that they had installed and used an app from a local media outlet on their smartphone, a tablet, or on a connected-TV.  It's not a random sample, but good enough to provide an initial look.

Local news apps were overwhelmingly on smartphones (92%), while more than a third (37%) have local news apps on tablets.  (Only 4% have them on connected TVs, but penetration of those sets remains very low).  Demographically, local news app users are well-educated (92% have at least some college) and affluent (71% reported incomes of $50K or more).  When asked their reasons for downloading a local news app, the top responses were that the apps were best for local news and for local weather.  In fact, news, weather & sports account for 97% of app interest.  The apps were used fairly consistently throughout the day (except for overnight (11pm - 6 am) and dinner time (5- 8 pm).  Some 26-36% of respondents reported using local news apps in all  of the other dayparts.  Users were also generally happy with the apps - 60% said they would be Likely or Very Likely to recommend the app to others. 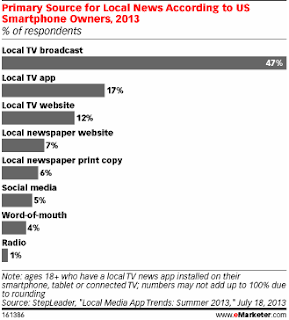