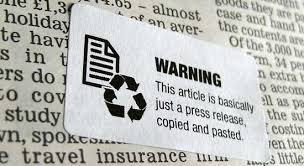 Thanks to the Sunlight Foundation, press critics have a new tool to find out.  They've developed, and released, a new tool called Churnalism, where press reports are compared to an archive of U.S. government, corporate, and other promotional content.  It's based on a similar project in the U.K.


"The tool is, essentially, an open-source plagiarism detection engine," web developer Kaitlin Devine explained to me. It will scan any text (a news article, e.g.) and compare it with a corpus of press releases and Wikipedia entries. If it finds similar language, you'll get a notification of a detected "churn" and you'll be able to take a look at the two sources side by side.

Not everything the tool detects will be a problem - quotes, for example, are likely to be identified by the tool.  In fact, Devine noted that science news scores poorly in Churnalism checks because technical and scientific language is often "so specific that it becomes very hard to reinterpret."

In the current environment of "journolists" and the  repeated repetition of talking points, this is not likely to help the image that journalists like to portray of their field - of independence and skepticism.  But it will confirm for many, I suspect, how limited and poor original reporting is among news organizations.

Source -  Is It Journalism, or Just a Repackaged Press Release? Here's a Tool to Help You Find Out, The Atlantic
Posted by Benjamin J. Bates at 12:00 PM